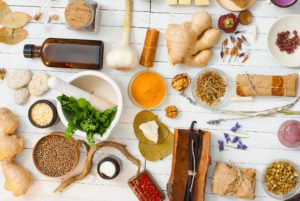 Food sensitivities and food allergies are receiving more press these days. With well-known healthcare practitioners like Dr. Mark Hyman and Dr. Oz covering the topic in detail, I’ve noticed more and more people asking about them. Before jumping into the relevance of food sensitivity symptoms and testing, let’s get down to brass tacks. Here’s a quick breakdown of the differences between food allergies, sensitivities and intolerances.

Food Allergies – true food allergies are what we call “acute” or “immediate onset” allergies because they elicit a reaction usually within an hour. When a food is consumed, part of its protein initiates an IgE (type of immune cell) response that releases large amounts of histamine into the body. These responses are what people typically think of as food allergies – i.e. when someone eats a peanut and goes into anaphylactic shock. Symptoms can be mild to severe (including death) and reactions typically involve the airways, skin or intestines.

Food Sensitivities – often called “delayed food allergies” or “hypersensitivities,” these are non-IgE-mediated reactions (instead, they most commonly involve IgG antibodies). Reactions can occur anywhere from 3 to 72 hours after a food is consumed. In a food sensitivity immune response, protein antigens bind to antibodies and form immune complexes which can travel throughout the body and deposit in any tissue, causing widespread inflammation and a variety of symptoms from digestive distress to joint pain. Because of their symptom and onset variability, food sensitivities can be hard to pinpoint or detect; generally speaking, symptoms are not as severe as true food allergies.

Food Intolerance – these are reactions that do not involve the immune system. Usually a food intolerance is caused by deficiency in a protein or enzyme necessary for proper digestion of a food. For example, lactose intolerance occurs when someone lacks the lactase enzyme to break down the primary carbohydrate in milk.

Now that we’ve covered the basics, let’s delve into it. True food allergies are pretty rare. The latest CDC stats1 show that approximately 5 out of 100 children under the age of 18 have an IgE mediated food allergy (although this number has risen in recent years). Children suffer from food allergies more than adults and occasionally grow out of them. Food sensitivities, however, are much more common. It is estimated that food sensitivities affect 1 in 3 people at some point in their lives2. They have also been linked to chronic conditions unresponsive to conventional medicine, such as digestive disorders like IBS3.

Why is does this matter? Chronic irritation and inflammation from food sensitivities can lead to digestive distress, pain, brain fog, fatigue, weight gain, and a host of other symptoms.* If you’ve suffered from any of these ailments, you could be dealing with a food sensitivity. In my practice, I’ve seen people who have had chronic issues for years, like fibromyalgia, become virtually symptom-free after a food elimination diet and gut healing protocol.

“What is a gut healing protocol?” you ask! Without getting too complicated and scientific, food sensitivities can develop as a result of increased intestinal permeability, a.k.a. “leaky gut.” In a nutshell, the tight spaces between the cells of your GI tract become irritated (which can happen for a variety of reasons including stress, overuse of NSAIDS, and bacterial infection, among others) and instead of forming a tight barrier, they open up and become leaky. This allows partially undigested food proteins and bacteria to seep into the bloodstream and activate the immune system. Hence, an immune response to a food – or a food sensitivity. The good news is that, oftentimes, food sensitivities can be minimized by temporarily removing the offending foods – called an elimination diet – and healing the gut. Depending on the number of food sensitivities and the severity of symptoms, the protocol will look different for each person.

The best way to determine which foods you’re sensitive to is by doing a blood test that measures the levels of IgG (and IgA) antibodies to specific foods. There are a handful of reliable laboratories that run these tests. Although you can order some tests on your own, it’s best to work with a healthcare practitioner like a nutritionist or a naturopathic doctor who’s familiar with food sensitivity testing and elimination diets to help guide you through the right treatment plan. The most common food sensitivities are dairy, gluten, soy, peanuts, eggs, shellfish, and nightshades (tomatoes, bell peppers, eggplant, potatoes), but to create the most effective plan, it helps to have objective data from tests to identify which specific foods you are reacting to.

Does this sound confusing, overwhelming, or relatable? Don’t worry – the good news is that many times symptoms from food sensitivities can be mediated with the right diet and improved gut health. If you’re ready to get to the bottom of unexplained symptoms and feel better, contact me for more information!

*A quick clarification about Celiac Disease, as many people characterize it as a food allergy. Celiac Disease (CD) is an autoimmune condition that affects the digestive system and can have serious consequences. When people with CD eat foods that contain gluten, the immune system responds by attacking the lining of the small intestine. When this happens, the body can’t absorb all the nutrients it needs. Over time, this can lead to other autoimmune diseases, like type 1 diabetes and multiple sclerosis, anemia, osteoporosis, and other problems, such as miscarriages. Celiac Disease is a life-long condition that cannot be cured, but can be managed with strict adherence to a gluten free diet.